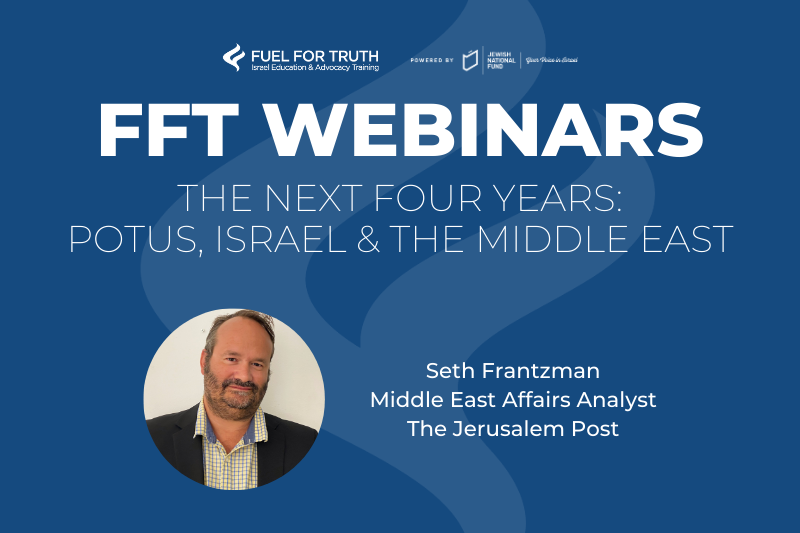 The Next Four Years: POTUS, Israel & the Middle East

Join our upcoming FFT Webinar as Seth Frantzman, The Jerusalem Post’s Middle East Affairs Analyst, examines what Israel and the Middle East can expect from a Trump or Biden administration over the next four years. Have a question for Seth? Toward the end of the session we will be taking questions from our audience to guide the discussion.

Speaker Info: Seth J. Frantzman is Oped Editor and Middle East Affairs Analyst at The Jerusalem Post. He has covered the war against Islamic State, three Gaza wars, the conflict in Ukraine, the refugee crises in Eastern Europe and also reported from Iraq, Turkey, Jordan, Egypt, Senegal, the UAE, Ukraine and Russia.

Born in Maine, he received his Ph.D from the Hebrew University of Jerusalem in 2010. He previously served as a research associate at the Rubin Center for Research in International Affairs at the Interdisciplinary Center, Herzliya and a lecturer in American Studies at Al-Quds University. Frantzman has conducted research and worked for the JDC, The Shalem Center, the Jerusalem Institute for Market Studies and as a Post-Doctoral at the Hebrew University of Jerusalem. He is the author of After ISIS: America, Iran and the Struggle for the Middle East.